Exposure to occupational vapour, gas, dust, or fume  (VGDF) doubles the risk of respiratory-related sickness absence (RRSA) in those reporting respiratory symptoms or asthma, according to this pan-European population- based study. A total of 6,988 participants who were in work at the time of the study were classified according to their respiratory symptoms or diagnosis. One in 15 (6.9%) of those with physician-diagnosed asthma, self-reported rhinitis, or wheeze/breathlessness reported RRSA in the previous year. Exposure to VGDF was associated with significant raised risk of RRSA in each group: asthma group, odds ratio (OR) = 2.0 (95% confidence interval (CI) 1.1–3.6); wheeze/breathlessness group, OR = 2.2 (95% CI 1.01–4.8); rhinitis group, OR = 1.9 (95% CI 1.02–3.4). These raised risks remained after controlling for confounders. 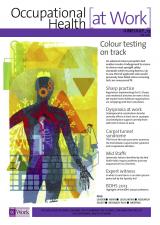