A problem-solving intervention successfully reduced both the incidence of recurrent sickness absence, and time to recurrent sickness absence in workers with common mental health disorders (CMDs), according to this cluster-randomised controlled trial. Eighty workers took part in the ‘Stimulating healthy participation and relapse prevention at work’ (SHARP) programme, based on a mental health management guideline developed by the Netherlands Society of Occupational Medicine. SHARP is a five-step problem-solving process, applied in the first two weeks of the return to work and delivered by an occupational physician. Seventy-eight workers were given ‘care as usual’ by occupational physicians. The incidence of recurrent CMD sickness absence during the 12-month follow-up was significantly lower in the SHARP group than in the control group (OR = 0.40; CI 0.20–0.81); time to recurrent sickness absence was also lower (hazard ratio (HR) = 0.53; CI 0.33–0.86). 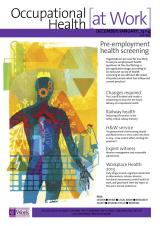