The disabilities of the arm, shoulder and hand (DASH) questionnaire is a 30-item self-reported screening tool that assesses symptom severity, functional status and disability of the upper limbs. In a study of workers referred to an occupational medicine department with an upper-limb disorder (ULD), the DASH questionnaire was the only tool able to predict which workers would return to work (RTW), and which would not. Fifty-six employees with a ULD were examined by an occupational therapist. Functional testing included grip and pinch strength tests, hand performance using the Functional Dexterity Test (FDT), and the DASH questionnaire. Whether or not workers returned to work was assessed one to four years after the assessment. In total, 42% of the employees returned, while 58% did not. There were no differences in age, gender, smoking habits or education level between those who did or did not return. Importantly, there were also no significant differences in any of the functional variables (grip and pinch strength, FDT scores), job requirements and vocational RTW predictors (eg physical work intensity, working hours, seniority). The only significant difference was in the DASH score, which was significantly higher (56 out of 100) in the did-not-return group compared with those who did go back (27 out of 100; p < 0.001). The DASH score was also a significant independent predictor of return to work (OR = 0.915; 0.84–0.99, p < 0.05) in a multivariate regression analysis. 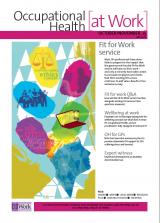