An ‘at work and coping’ (AWaC) intervention combining work-focused cognitive behavioural therapy (CBT) with supported employment – based on the ‘individual placement and support’ (IPS) model – helped improve work participation in workers struggling with mental health problems, particularly those who had been on long-term benefits. This Norwegian randomised controlled trial included 1,193 workers aged 18–60 who were either at risk of sick leave, on sick leave or on long-term benefits owing to a common mental health disorder. Participants in the AWaC group were offered up to 15 sessions of CBT and, where necessary, IPS. Individuals in the control group received ‘standard’ treatment from their GP along with a letter providing information and encouraging the use of self-help resources. Work participation was classified as: in regular work; a combination of being in work and receiving health- or work-related benefits; or out of work. Participants in the AWaC group were significantly more likely than controls to have maintained or increased work participation at 12 months (44% of AWaC participants compared with 37% of controls; p = 0.015), with the difference remaining significant at 18 months. The difference was largest among participants on long-term benefits at the start of the study – 24% of such individuals in the AWaC group had increased work participation at 12 months, compared with 12% of those in the control group (p = 0.007). The figures were 30% and 11%, respectively, at 18 months. Those on long-term benefits were also more likely than other participants to have received IPS. 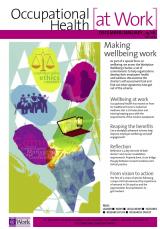