Interventions aimed at rehabilitating long-term sickness absentees should focus on overcoming fears of returning to work and on illness perceptions of subjective health complaints. The prospective cohort study was carried out on 135 individuals on long-term sick leave (mean 10.5 months). Most had complex, nonspecific subjective health complaints. They were given a four-week inpatient vocational rehabilitation course, with six one-hour sessions five days a week. Sixty per cent had returned to work after three months, and 70% after 12 months. Fear-avoidance beliefs about work were the most important risk factors for not returning, both at three and 12 months. Subjective health complaints were significant at three months. 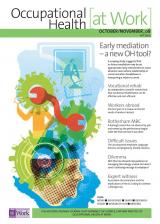