Risk of future mortality increases the more sickness absence a worker takes, according to study of nearly 236,000 Danish workers in receipt of statutory sickness absence compensation. Individual absence duration was recorded over 12 months, with mortality monitored over four years, starting two years after the end of the absence-recording period. Just over 3,000 workers (1.3%) died during the follow-up. Age-adjusted mortality rate in men with one week’s absence was 2.53 deaths per 1,000 person years; each additional week’s absence was associated with a higher mortality rate, rising to 5.18 per 1,000 at six or more weeks. Sickness absence duration, which was also predictive of female mortality, may thus be useful to inform secondary prevention measures. 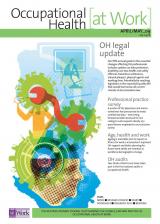