Danish research findings are generally reassuring on the risks to hospital workers who continue to work during pregnancy. A cohort of 5,976 pregnant female hospital workers was compared to a reference group of 60,890 pregnant women in other occupations. No significant associations were found between hospital work and either foetal loss, preterm birth, infant gender or small for- gestational-age infants. There were slightly raised prevalences of congenital abnormalities in some hospital subgroups, potentially due to exposure to hazardous chemicals, shiftwork or physically demanding work. 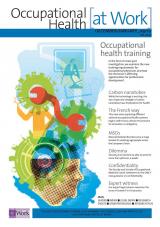