Older hospital workers given guided yoga, exercise and vitality coaching sessions for six months did not benefit in terms of improved vitality, performance or attendance at work, according to this randomised controlled trial of 730 workers, aged 45 or over, from two teaching hospitals in Amsterdam. Workers in the intervention group took part in a six-month ‘vitality exercise programme’, comprising weekly guided yoga and weekly guided exercise. They were also given free fruit, three individual goal-setting sessions with a ‘vitality coach’, and were asked to carry out vigorous physical activity for at least 45 minutes once a week. Both control and intervention workers received written information about healthy diet, exercise and relaxation. Attendance rates for the yoga and exercise sessions were 52% and 45% respectively. There were no significant differences between the intervention and control groups at six or 12-month follow-up for general vitality, work-related vitality, work engagement, productivity or sick leave. General and work-related vitality was significantly higher among workers with better compliance to the yoga programme. 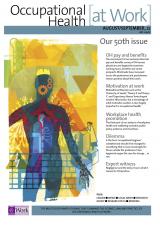