A systematic review was undertaken to identify psychosocial factors that might predict a failure to return to work in people with non-chronic non-specific low back pain (NSLBP), defined as lasting less than three months – 24 studies met inclusion criteria. An expectation of recovery was predictive of return to work (strong evidence from nine studies; four of high quality). There was strong evidence that depression, job satisfaction and stress were not predictive of work outcome. There was moderate evidence that fear-avoidance beliefs were predictive, and that anxiety was not predictive of work outcome. Psychosocial assessment in the non-chronic phase of NSLBP should focus on recovery expectation and fear-avoidance beliefs and behaviours.

Tags back pain evidence based practice Return to work 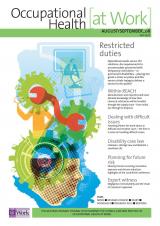