One postulated mechanism for the increased risk of breast cancer in shiftworkers is the inhibition of melatonin synthesis by exposure to light during nightwork. This cross-sectional study of 354 female nurses and midwives working rotating night shifts, and 370 working only day shifts, found no difference in the morning levels of urinary 6-sulfatoxymelatonin (MT6) between the two groups. However, women working at least eight night shifts per month recorded significantly lower MT6 concentrations than those who had worked between two and seven nights. 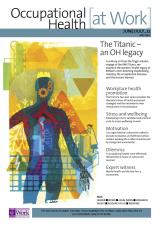